Lindsay Vonn has won the latest round of FIS World Cup skiing by a wide margin.  Vonn stayed focused despite her personal life (Lindsay and her husband of 4 years, Thomas Vonn, recently filed for divorce) to win by the biggest margin in her career.  Nearly 2 seconds separated her from second place, Tina Wierather in Super G competition. 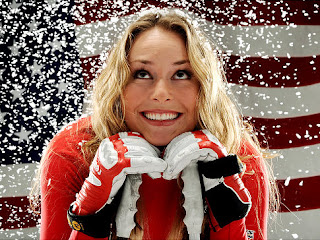 Vonn became a household name when she skied the 2010 Vancouver Olympics on a bruised shin.  She won Gold in the Downhill and Bronze in the Super G.  Some may know her from the bikini photo-shoot she did for Sports Illustrated Magazine.

Stacey Cook, Truckee native, placed 18th on Saturday's downhill and 9th on Sunday's downhill, giving her a 32nd place on the Super G leader board.  Julia Mancuso (Double Silver medalist in the 2010 Vancouver Olympics) is ranked 6th on the leader board.  Mancuso is a native of Squaw Valley.

The next ladies Super G competition is scheduled for December 7th, at Beaver Creek, Colorado.