The National Transportation Safety Board (NTSB) announced several safety recommendations in today’s investigative update.  An investigation was launched after the crash of a racing plane that killed 10 spectators on September 16, 2011.
The airplane was an extensively modified P-51D fighter plane from the 1940’s.  Modifications included clipping 8 feet from the wingspan.  The airplane was raced in the “unlimited” class with the name “Galloping Ghost”.
Telemetry data from the airplane indicates the airplane exceeded 9 G’s.  Investigators described this as an unanticipated and rapid high G-force situation that incapacitated the 74 year-old pilot. 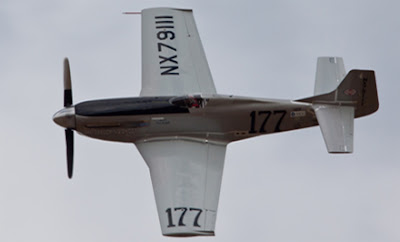 The NTSB made the following recommendations for future air races.
-       More rigorous pre-race inspections and documentation of modifications.
-       Provide high G-force training and evaluate the implementation of G-suits.
-       Requiring pilots to demonstrate their modified aircraft’s flight characteristics and abilities.
-       Modify the air racing course to lessen the exposure to spectators.
The NTSB investigation is ongoing.
Tickets are on sale now for the 2012 National Championship Air Races.  The dates are Sept. 12-16.  http://www.airrace.org
Posted by Unknown at 8:57 PM