The Memorial Day weekend means different things to different people. For ultra-distance runners, as patriotic as they may be, the last weekend in May means the Western States 100 is only a month away.

It's the sport's yearly crowning event, and it's arguably the best day in sport — for a variety of reasons. There's no admission, no parking charges, no assigned seating, no parimutuel betting.

And it's as compelling as any horse race, baseball game or boxing match. The arena, which extends from Squaw Valley to Auburn, offers the opportunity to watch endurance athletes at intimately close range. 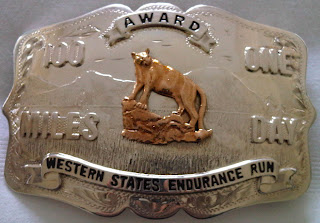 The viewing options for the country's most renowned ultramarathon begin with a 5 a.m. shotgun blast on the fourth weekend June (this year June 23-24) at the site of the 1960 Winter Olympics. They begin to conclude around 9 p.m. when the winner usually arrives at Placer High School and circles the track to the finish line. In all, it's 30 hours, all packed literally and figuratively with the peaks and valleys of endurance.

For anyone with an adventurous spirit, sunscreen and an appropriate pair of shoes, here's a thumbnail synopsis and best viewing points of the Western States 100 course:

* Squaw Valley (mile 0) - The coffee and donuts are usually ready at 4 a.m. near the base of the gondola. Nervous runners and crews begin to gather shortly thereafter, and at 5 a.m. a shotgun blast sends the field on a 2,500-foot climb in less than five miles to Emigrant Pass.

Hearty souls who want to see the runners crest the highest point on the course can leave Squaw Valley at 4 a.m. or so and make it to the top at 5:45, just as the leaders reach the summit.

Dress warmly, make the trek under the light of the moon and it's well worth it to see how the field is progressing as the sun rises. The return run down to the base of Squaw Valley takes 45 minutes and is a delightful five-mile journey.

* Robinson's Flat (mile 31) – The leaders arrive as if they've just finished a brief jog around the neighborhood park. Even the back-of-the-packers usually arrive here in good spirits. But in snow years, the runners will likely be considering changing sports and they'll be more than a few scrapes, bruises and blood from tumbles in the hard-packed white stuff.


* Michigan Bluff (mile 55.7) – After negotiating the ascents and descents through Deep Canyon, Dusty Corners, Devil's Thumb, Deadwood Ridge and El Dorado Canyon, the runners will climb more than 1,800 feet in less than three miles and reach the first "city" on the course.

A few houses and a once-a-year hamburger stand await the runners who will begin to arrive about 1:30 p.m. and continue climbing out of the canyons for another eight hours.

Spectators can park less than a mile from the area and get as close to being in the race as any sport around. Bring a hat, sunscreen, a lawn chair and watch the spectrum of ultra-distance running world unfold.

Most of the field will arrive in the heat of the day. Some runners, fatigued or dehydrated, won't leave after cutting their medical wristbands and withdrawing.


* Foresthill (mile 62.0) – The is the course's "major city," a small logging community where most of the field will meet their pacers for the first time. More than once, the men's race has unfolded in front of the biggest crowd on the course. Look for the front-runners around 2:30 p.m. and the back-of-the-pack crowd at 11 p.m.

The consensus is that the race begins here. The runners face 38 more miles, including a lot of downhill stretches that can pound the runners' quads. It's also where many a runner has discovered a condition known as "cratered." The terms is self-explanatory.

* Ruck-A-Chucky (mile 78.0) – Known as the River Crossing, the runners and their pacers usually forge the river via rope or in a raft if it's a "snow year" and the river is high.

The aid station just prior the crossing is the most elaborate on the course. It's approached by most runners in the dark. Strings of Christmas tree lights and a slew of depleted runners resting on medical cots have resulted in the aid station's nickname as a M.A.S.H. unit or not unlike some of the medical-area scenes in the movie Apocalypse Now.

Spirits are high as the field steadily emerges from the mountains, dirty and tired but energized because Auburn is close.

* Placer High School (mile 100) – The infield and bleachers ever-so-slowly begin to fill and race announcer begins to entice the crowd at about 8 p.m., with reports from Robie Point, a little more than a mile away.

Bring your ice chest, a blanket or your tent and watch the night unfold. The largest share of runners arrive in two time frames on Sunday morning, 4-5 a.m. and 10-11 a.m., the hour before the 24 and 30-hour cutoffs.

If you can't make it to any other section of the course, drive to the finish area of the Western States 100. As the runners find their way, the scene will either capture your interest enough so that someday you may consider entering the event, or it will solidify your lack of interest. There's no middle ground.
Posted by Unknown at 10:22 PM