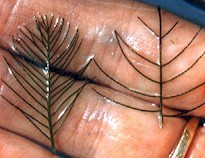 Lake Tahoe has been battling an invasive weed called Eurasian watermilfoil since the 1980’s. It was first discovered in Tahoe Keys and it’s been spreading ever since. Most of Tahoe’s marinas are now infested with this weed that crowds out native plants and takes away oxygen from fish.
Now the weed can be found the length of the Truckee River from Lake Tahoe to Pyramid Lake.  They expect Pyramid Lake to become infected at some point as well. The weeds can grow thick enough t to slow the flow of the river under certain conditions.

Some of the largest mats of the weed are just downstream from the dam at Fanny Bridge.  Rafters are already sliding through the stuff.  If it gets much worse, it will really affect rafters and fishermen.
There have been several volunteer weed pulling events to eradicate the weed.  Unfortunately, the weed is hard to kill and it is easily spread when pieces of it are dislodged and allowed to float downstream.
The sure way to kill the weed is to remove it from sunlight.  In other words, you have to cover it up with tarps made of landscape fabric or jute. Covering the weed is difficult in the river.
For now, little is being done to rid the weed from the Truckee River.  Fisherman and rafters will just have to contend with weeds in the river.
Posted by Unknown at 9:18 PM