Sarah Burke’s efforts to get the ski half pipe into the Olympics did not go unnoticed by her country’s Olympic committee. Burke will be inducted into the Canadian Olympic Hall of Fame. 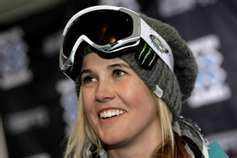 Burke never made it the Olympics in the sport she loved.  The ski half pipe will be in the 2014 Winter Games for the first time.  Burke was considered a medal contender for the 2014 Olympic ski half pipe debut, but was injured in a training accident this year.
Burke was critically injured while training in Park City’s half pipe.  She landed on her head and suffered a ruptured artery in her spine.  She died a few days later on January 19, 2012 at the age of 29.
Burke was a four-time Winter X Games gold medalist in the ski half pipe.  She also won the 2005 World Championships and received the ESPN female action sports athlete award in 2007.
The induction ceremony will take place September 21, 2012 in Toronto.
Posted by Unknown at 9:06 AM