North Face Masters this season at Squaw and Alpine 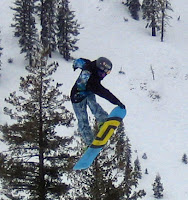 The North Face Masters of Snowboarding event will be February 13-14 at Alpine Meadows and February 14-17 at Squaw Valley. The former 3-stop tour has been condensed to just this one stop.
The Masters of Snowboarding is tailored to fill a competition gap in the sport of Big Mountain Snowboarding. Riders push their limits in a pure environment, testing their creativity and athleticism over natural cliffs, chutes, and steep powder stashes.