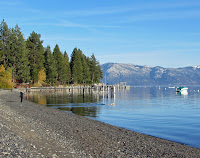 The Tahoe Transportation District (TTD) has a vision for a fleet of high speed passenger boats linking the north and south shores. The idea is to get people in the Tahoe basin out of their cars.
TTD launched a pilot study for ferry boat service this past summer. They started with a single 30 foot boat that could haul 12 people and 8 bikes. They had 4 ports and two routes.  A north to south route was not an option. You had to call for reservations and the ride was expensive. Adults cost $10 each way.

A transportation consulting firm has reviewed the passenger service and reported the following numbers.  Approximately $11,000 dollars in revenues were generated from rider fares.  However, the cost for the project was $183,000 dollars.  Therefore, the true cost of each passenger trip was about $150 dollars!
Wow, they lost $140 dollars for every passenger they carried. This great experiment is funded through the Placer County Transient Occupancy Tax, North Lake Tahoe Chamber, Central Violations Bureau, and the Resort Association.
TTD will sponsor the water shuttle next year with several changes.  They plan to increase their hours of operation, adjust the fair structure, accept credit cards for payment, and accept passengers without reservations. It would be nice if they could achieve some kind of success in the future.
Posted by Unknown at 5:00 AM