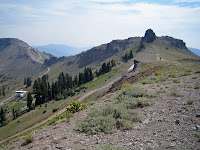 Troy Caldwell owns the land that separates Alpine Meadows from Squaw Valley. Caldwell bought the land (460 acres) from Southern Pacific Railroad in 1990.
The land generates income because Squaw’s Olympic Lady and KT-22 lifts are on his property. Squaw makes lease payments to Caldwell for the use of his land. At one time Squaw sued Caldwell, challenging the property sale and lease payments. Caldwell eventually won the court case, but dropped all positive relations with Squaw.

In 2004, Caldwell got the permits to develop his land as a ski resort. Caldwell put in several chair towers for his new resort, White Wolf. The project never got completed. The towers are visible today as you walk up the Five Lakes Trail from Alpine Meadows.
In 2010, when KSL bought Squaw Valley, new management came on board as Caldwell’s neighbor. Andy Wirth, Squaw’s CEO, has a positive relationship with Caldwell. In 2011, Squaw/Alpine started merger talks for a backcountry link between the two resorts. The ski link will cross U.S. Forest Service land, as well as Caldwell’s land. This "link" is only the start of something big that may oneday develop into a happy partnership.
Caldwell, age 63, says he wants to see White Wolf become a ski resort in his lifetime.  White Wolf would be a “high-end” resort with a Gondola, 3 lifts, mid-mountain lodge and a
small village with an ice rink. 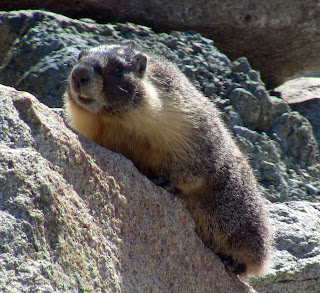 Who knows, Caldwell might grow tired and sell to KSL. KSL would become owners of the largest ski resort in the U.S., with over 6,000 acres.
Posted by Unknown at 4:03 PM