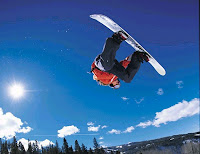 Copper Mountain will open the 17th season of the U.S. Grand Prix Tour this January 9-12. This year, the newly added Olympic sport of slopestyle snowboarding will debut. Athletes will be able to earn qualifying points for the 2014 Olympic Winter Games at this event.
Organizers expect to see all the top names in attendance. Elena Hight, from South Lake Tahoe, is expected to be throwing down great runs in the snowboard halfpipe. Jamie Anderson, also from the south shore, will be on the slopestyle course. Northstar’s poster boy, Shaun White, will be battling in the halfpipe with Louie Vito for top honors.
Sprint U.S. Grand Prix Schedule