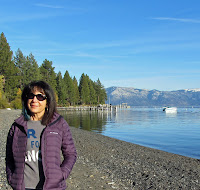 For the second year in a row, the water clarity of Lake Tahoe has improved. U.C. Davis recently released the remarkable 2012 data that shows a whopping 6.4 foot improvement over 2011. The recent clarity number is 75.3 feet. This is the best clarity number since 2002.
Clarity is measured by the depth at which a 10 inch white disk remains visible when lowered into the water. The measurements have been taken since 1968, when the disk could be seen down to an average depth of 102.4 feet.


The annual clarity level is the average of 22 individual readings taken throughout the year. The lowest 2012 recorded reading was 57 feet, and the highest was 107 feet.
Federal and state regulators have set a clarity restoration target of 97.4 feet. The biggest contributor to reduced clarity is urban storm water runoff. This is why you see constant improvements to roadway drainage systems around the lake. The new clarity figures indicate the drainage systems may be working.
For a complete list of Lake Tahoe clarity readings since 1968, visit: http://terc.ucdavis.edu/research/SecchiData.pdf.
Posted by Unknown at 4:00 AM