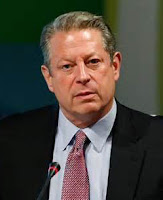 The Tahoe Summit began in 1997, when then President Clinton signed a $300 million dollar bill to support conservation at Lake Tahoe. Al Gore was there when the bill was signed and Al Gore has been a part of the Tahoe Summit ever since.
The summit will be held at Sand Harbor, Nevada on August 19, 2013. Al Gore will deliver the key note message. The theme for this year’s summit will be “A Clean Lake Legacy: Preserving Lake Tahoe for Future Generations.”


The long standing Lake Tahoe environmental compact between California and Nevada has been strained in recent years. This June, the Nevada State Legislature passed a bill to renew the state’s agreement with California to preserve the environment around Lake Tahoe.
Top State and Federal law makers will attend the Lake Tahoe Summit. No word on U.S. Senator Dianne Feinstein’s attendance. Feinstein owns a lake front home on Rubicon Bay in Lake Tahoe.
Posted by Unknown at 2:40 PM