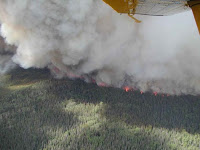 Smoke from the American and Rim Fires are converging on Lake Tahoe to form unhealthy air. When you smell the smoke in the air, you are breathing fine particulate matter that is injurious to your lungs. During the day, the sun heats up the airborne toxins to form unhealthy ozone levels as well.
Washoe County Health District (Nevada side of Lake Tahoe) has issued a health advisory in effect from August 22-25, 2013. Air Quality is currently in the “unhealthy” range. Smoke can irritate the eyes, and airways, causing coughing, a scratchy throat, irritated sinuses, headaches, stinging eyes or a runny nose.
Nevada and Placer Counties have issued health advisories, though none are in effect at this time. The weather plays a key role in the distribution of smoke, so the air quality is changeable. Typically the smoke has been worse in the afternoon.
Sure, back in the day I ignored all health advisories and I rarely experienced symptoms. However, I wonder what the long-term health effects might be? I don’t want to risk it anymore. I would not recommend heavy exercise in the Lake Tahoe basin until the fires are extinguished.
The American Fire, 40 miles west of Lake Tahoe, has been burning since August 10, 2013. The size is 20,232 acres with 66% containment.
The Rim Fire, 63 miles south of Lake Tahoe, has been burning since August 17, 2013. The size is now 105,620 acres with 2% containment
Posted by Unknown at 10:17 PM