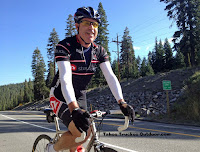 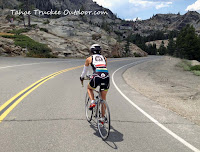 The Amgen Tour of California bicycle race has announced the host cities for 2016. South Lake Tahoe will host the finish for Stage 5 on May 19,2016. Stage 5 begins in Lodi and features a long day of climbing which will "reach the highest elevation ever mounted by the race: 8,600 feet." The route will likely climb Highway 88 over Carson Pass.

Race teams, riders, and route information will be announced in the weeks ahead.

The 2016 Amgen Tour of California will feature four days of women's racing, May 19-22. The top 20 UCI Women's Teams will be invited to participate. South Lake Tahoe hosted two women's stages of the Amgen Tour last year.

2016 will mark the 11th year of the Amgen Tour of California. The event challenges the world's top professional cycling teams to compete on demanding courses throughout central and southern California. The teams chosen to participate have included Olympic medalists, Tour de France contenders and World Champions.
Posted by Unknown at 5:00 AM

Email ThisBlogThis!Share to TwitterShare to FacebookShare to Pinterest
Labels: cycling